“[t]he global climate is changing, with greenhouse gas emissions from human activity the dominant cause… Global emissions will need to peak soon and then decline rapidly for the Paris Agreement goals to be feasible. Even in this scenario the uncertain sensitivity of the climate to greenhouse gases means there would remain at least a small chance of 4°C or more of warming by 2100. It is therefore prudent to prepare for further warming whilst pursuing more stringent emission reductions as part of the global effort.”

“[c]hanges to the UK climate are likely to include periods of too much or too little water, increasing average and extreme temperatures, and sea level rise.””

The report concludes that the most urgent risks for the UK resulting from these changes are:

In addition the 2010 Climate Strategy for Wales concludes that

“without immediate, radical and sustained reductions in global greenhouse gas emissions, there will be severe consequences for human society, as well as the biodiversity and ecosystems that provide essential services for human livelihoods. Moreover, economic analysis suggests that action now will substantially reduce future costs of cutting emissions. In terms of adapting to future climate impacts too, the earlier we start to prepare, by understanding our vulnerability and building our capacity to adapt, the better equipped we will be to respond appropriately.”

The UK Government has set targets to reduce carbon emissions by 34% by 2020 and 80% by 2050 (against a 1990 baseline) as part of the Climate Change Act 2008. These are very challenging targets for reducing carbon emissions and apply to domestic, commercial and public sector bodies. As such the Welsh Government set a 3% year on year reduction target with the public sector expected to lead by example[i].

Though the public sector itself has a relatively low CO2 emissions (only about 2% of the UK total) its role is not just about reducing the carbon footprint within our its organisations, but in leading by example and assisting the wider community to change its behaviour.

As part of the drive to reduce carbon emissions the UK government has introduced the Carbon Reduction Commitment (CRC). While this originally set out to be a carbon trading scheme, it has evolved into a type of carbon tax to be paid by all organisations over a certain size. Conwy County Borough Council is part of this scheme which cost around £150k in year one. As the cost of carbon levy increases each year so does the pressure to reduce carbon emissions.

For the twelve months leading to Q1 2016 total greenhouse gas emissions across the UK have been provisionally estimated at 483.0 million tonnes carbon dioxide equivalent (MtCO2e)[ii].

Renewable energy is any source of energy that occurs naturally and is not exhaustible, such as wind, solar, tidal and hydro power. Some definitions also include landfill and sewage gas. As well as reducing reliance on fossil fuels and providing cleaner power, developing renewable energy sources for electricity generation is necessary to meet EU and UK Government targets on greenhouse gas emissions and to ensure fuel security. In its 2010 Energy Policy Statement, ‘A low carbon revolution’, the Welsh Government set out aspirations totaling 22.5 gigawatts of installed capacity from different renewable energy technologies in Wales by 2020/25. Currently capacity is at only 2.3 gigawatts in Wales, so there is a long way to go to hit that target [iii].

Energy production is currently responsible for about 30% of the UK’s carbon emissions[iv].

[1] The Climate Change Act requires the UK Government to compile every five years its assessment of the risks and opportunities arising for the UK from climate change, known as the Climate Change Risk Assessment (CCRA). The ASC’s Evidence Report published today will inform the Government’s second Climate Change Risk Assessment due to be presented to Parliament in January 2017. The report is the result of more than three years of work involving hundreds of leading scientists and experts from the public and private sectors and civil society. The risk assessment has been peer reviewed by UK and international specialists.

[iii] Renewable electricity in Scotland, Wales, Northern Ireland and the regions of England in 2015, Department for Business, Energy & Industrial Strategy, 2016

The UK Climate Change Risk Assessment Evidence Report 2017 shows that the global increase in temperature of 0.85°C since 1880 is mirrored in the UK climate, with higher average temperatures and some evidence of more extreme weather events. Average annual UK temperatures over land and the surrounding seas have increased in line with global observations, with a trend towards milder winters and hotter summers in recent decades. Sea levels globally and around the UK have risen by 15-20 centimetres since 1900. Whilst natural variability in the climate will continue to have a considerable influence on individual weather events, the recent episodes of severe and sustained rainfall are consistent with climate change projections.”

All sectors have seen a decrease in CO2 emissions since 2009. The largest decrease was in the energy production sector which saw a drop of about -40% or -86 MtCO2e in the seven year period from 2009 Q1. Transport saw the smallest decrease at only -2% or -2.4 MtCO2e. The public sector decreased their emissions by -21% or -2.1 MtCO2e. 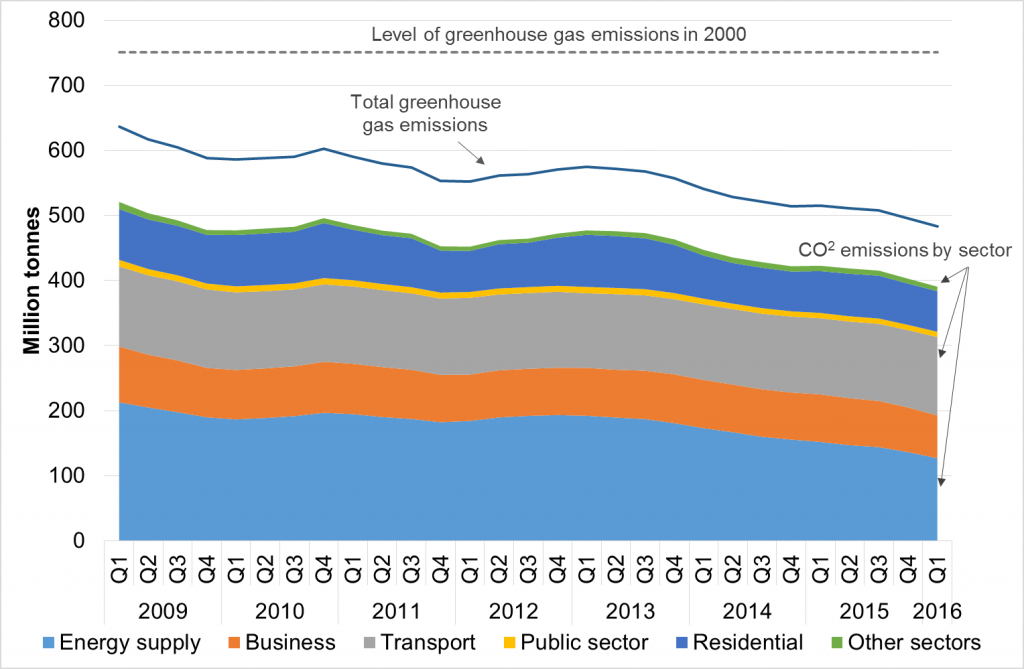 The UK is consuming 17% less energy than it did in 1998, and more of the energy we are consuming is coming from renewable sources. At the same time, the percentage of energy coming from renewable and waste sources (such as wind, hydro power and biomass) has risen from 1% of total UK energy consumption to 9%.However, the decline in North Sea oil and gas production has meant the UK has become increasingly dependent on imports of energy. All EU countries are currently net importers of energy.)

The latest set of projected changes in climate for Wales comes from the 2009 UK Climate Projections. Under a medium emissions (A1B) scenario, regional summer mean temperatures are projected to increase by between 0.9 – 4.5ºC by the 2050s compared to a 1961-1990 baseline[v].

Regional winter precipitation totals are projected to vary between -2 – to +31% for the same scenario[vi].

As well as the key challenges around climate change outlined in point 3.28.2 above the UK Climate Change Risk Assessment Evidence Report 2017 provides specific predictions of the impacts for Wales of climate change within the next two generations on infrastructure. Some of these predictions conclude that without adaptation beyond current plans there is

People said that they would like to see Conwy become carbon neutral in the future and more forward thinking about renewable energy. It was felt that the county should be more responsive to flooding and climate change risks.
This website uses cookies to improve your experience. We'll assume you're ok with this, but you can opt-out if you wish. Cookie settingsACCEPT
Privacy & Cookies Policy