The UK Government definition of domestic violence and abuse is:

“Any incident or pattern of incidents of controlling, coercive or threatening behaviour, violence or abuse between those aged 16 or over who are or have been intimate partners or family members regardless of gender or sexuality. This can encompass, but is not limited to, the following types of abuse:

Controlling behaviour is: a range of acts designed to make a person subordinate and/or dependent by isolating them from sources of support, exploiting their resources and capacities for personal gain, depriving them of the means needed for independence, resistance and escape and regulating their everyday behaviour.

Coercive behaviour is: an act or a pattern of acts of assault, threats, humiliation and intimidation or other abuse that is used to harm, punish, or frighten their victim.”

Domestic violence has a significant impact on the health and well-being of victims both in the immediate and longer term, continuing even after the relationship has ended. The psychological consequences of violence can be as serious as the physical effects. Exposure to violence leads to poorer physical health overall compared with women who have not experienced violence, and it increases the risk of women developing a range of health problems.

Children who live in homes where there is domestic violence grow up in an environment that is unpredictable, filled with tension and anxiety and dominated by fear. This can lead to significant emotional and psychological trauma. They are also at risk of physical harm themselves, either when caught in the middle of an assault or as direct victims of abuse themselves. Dealing with the effects of exposure to domestic violence is a significant element of work around mitigating adverse childhood experiences (see section 2.1 ‘Giving every child the ‘best start’ for more information).

Domestic abuse is recognised as a child protection matter. The definition of ‘harm’ in the Children’s Act includes exposure to witnessing the mistreatment of another. Around 18% of 11 to 17 year olds have been exposed to domestic abuse between adults in the home [i] and domestic abuse was identified as a risk factor in 54% of serious case reviews undertaken between 2011 and 2014 by social services in England [ii].

A considerable proportion of safeguarding children and adults work relates to the abuse or neglect of people with care and support needs who are living in their own homes. Domestic abuse is most commonly thought of as violence between intimate partners, but it can take many other forms and be perpetrated by a range of people. Much safeguarding is therefore also related to domestic abuse.

An estimated 1 in 4 women experience violence in their lifetime and 1 in 6 men.*  About 8.5% of women and 4.5% of men report having experienced domestic abuse in the previous year [iii]. This is equivalent to an estimated 16,000 female victims and 8,000 male victims in North Wales each year.

Domestic abuse is under-reported. The number of domestic violent crimes with injury in North Wales is much lower than the estimated number of people likely to have experienced the crime. For 2015/16 data from North Wales Police shows that there were 1,700 recorded domestic crimes with violence. In Conwy and Denbighshire:

It is estimated that the total costs of domestic abuse in North Wales is £66 million [iv]. This includes the costs to health care, criminal justice, social services, housing and refuges, legal costs and lost economic output. In addition the human and emotional costs are estimated at £114 million, based on the notion that people would pay something not to suffer the human and emotional costs of being injured. The overall cost of domestic abuse fell significantly between 2001 and 2008, mostly due to the decrease in the cost of lost economic output, and a decrease in the human and emotional cost, as a result of increased utilisation of public services. The overall rate of domestic violence also fell between 2001 and 2008, concluding that investment in public services was cost effective for the country as a whole, during that time.

There are a number of risk factors that, whilst alone do not cause domestic violence, can increase the chances that abuse may begin, increase the level of risk to a victim, or make a victim more vulnerable to abuse and less able to seek help. There are also some risk factors such as drugs and alcohol that have been shown to increase the frequency or severity of attacks. These include:

Domestic abuse has long been under-reported and the increase in the number of crimes over the past three years is likely to be due to an increase in reporting rather than incidence.

The number of reported sexual crimes has also seen an increase over the past few years.

The proportion of victims who are female has remained fairly consistent at around 80% for both categories crime.

Domestic violence crimes with injury in Conwy CB and Denbighshire 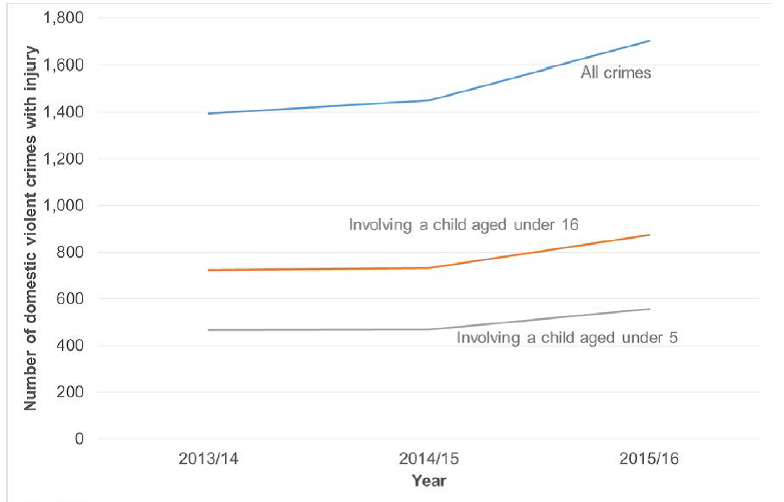 If recent trends in reporting crimes persist, reporting of incidences of domestic violence may increase, though it is not clear if recent upward trends are due to increase in occurrences or increase in willingness to report the crimes.

The introduction of the benefit cap and other welfare reforms may make victims more likely to stay with their abuser if they can’t afford to move. Universal credit will be paid to one partner which may increase a victim’s financial reliance on their abuser.

Changes to legal aid rules may mean that more victims may stay with the perpetrator because legal aid will not be routinely available in separation, divorce and child contact cases, or for non-British victims not on a spousal visa.

Through its ‘Right to be safe’ strategy [v], Welsh Government requires partners to work together to ensure, amongst other things, that with regard to domestic violence and other violence against women, they are:

The primary concern when tackling domestic abuse must be the welfare and safety of victims and any affected children. However, consideration also needs to be given to providing help for those who are abusive and violent toward their partners, in particular prevention programmes which deal with behavioural change.

[v] The right to be safe strategy, Welsh Government, 2010