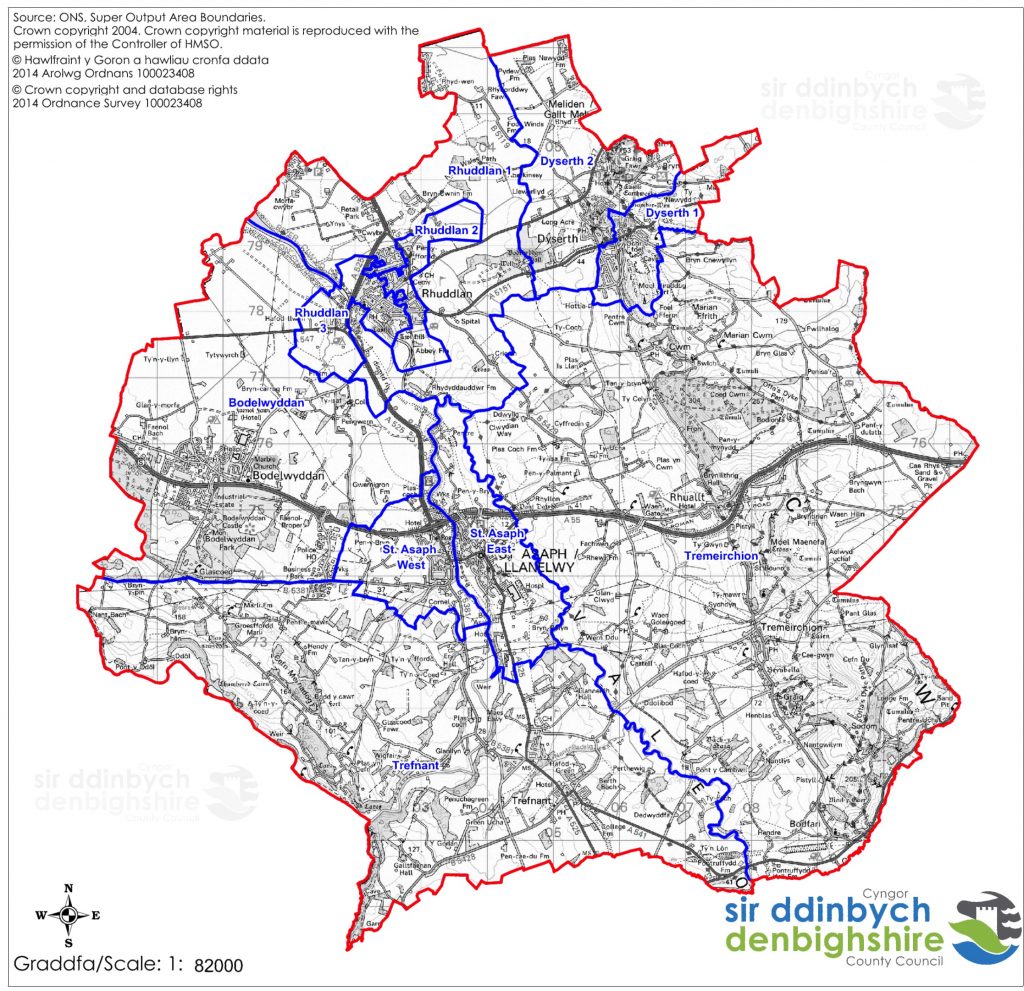 The Elwy area is home to some of the key employment sites and development land in Denbighshire. The intersection of the A55 and A525 mark the centre of the area with key sites in close proximity. These include St Asaph Business Park, Kinmel Park, Bodelwyddan Business Park and Ysbyty Glan Clwyd. There are also significant retail and leisure sites at the Rhuddlan Triangle and Tweedmill shopping outlet.   Further, substantial residential and employment development has been earmarked for the Bodelwyddan area in Denbighshire’s Local Development Plan. These sites are in addition to the traditional market town / city function of St Asaph with its live-stock market and local facilities as well as the local shops and facilities at Rhuddlan and Bodelwyddan. Over recent years Rhuddlan town centre has developed well with reducing numbers of vacant properties and increasing numbers of service outlets. St Asaph has fared less well and has experienced an increase in vacant units from 2012.

Education assets in the area include:

The Elwy area includes the villages of Dyserth, Cwm, Waen, Rhuallt and Tremeirchion which skirt the boundary of the Clwydian Range Area of Outstanding Natural Beauty. In the northern portion significant limestone habitats can be found supporting many wild flowers including some rare and uncommon species such as autumn gentian and orchids. These in their turn support a variety of invertebrates including many butterflies and moths such as the common blue butterfly and the red- spotted burnet moth. Further south heather moorland and heathland support upland birds such as stonechat, tree pipit, hen harrier and merlin which visit the moors during the spring and summer months to breed.

A number of local environmental improvements are planned. The designation and management of Rhuddlan Local Nature Reserve (LNR) is intended to protect and enhance this accessible green space and actively engage with the local community. It will provide good access for both walking and cycling together with practical volunteer tasks.

A partnership approach between Denbighshire County Council and Dyserth Environment Group is expected to achieve Local Environmental Quality Improvements throughout the village, beginning with transforming Carreg Heilin into a Local Nature Area.

Finally, further development of the Prestatyn/Dyserth Way for its excellent recreational and biodiversity opportunities will improve this sustainable transport link.

A key concern in the Elwy area is flooding from the rivers Elwy and Clwyd. Recent flooding events have affected St Asaph and Rhuddlan as well as wide swathes of agricultural land. These have significant safety, economic and environmental consequences that require mitigation.

The expansion of employment land is likely to result in an increase in traffic which could have consequences for the road network in this part of the county. Concerns with the volume of traffic passing through St Asaph have been expressed over a number of years.

Participants in the County Conversation argued that there was a need to ensure roads were appropriate to expected traffic volumes taking into account potential technological change such as driverless or even flying cars. They also felt that cycling should be provided for and encouraged.

Another area in which participants anticipated development was renewable energy production, which was expected to increase through solar farms, together with offshore wind and tidal power outside of the area.

The wide range of outdoor leisure opportunities in the pleasant countryside surroundings, particularly walking and cycling are also key assets for enabling and promoting healthy lifestyles. Examples of work being undertaken in the short-term include expanding the St Asaph and Rhuddlan Health Walks and developing Tremeirchion Community Miles walk to encourage healthier lifestyles and regular exercise and increase visitors to the area.

There are plans for a new fitness suite at St Asaph Leisure Centre following the development of Ysgol Glan Clwyd. This will bring the facilities in line with the rest of the county with the addition of a dedicated studio for exercise classes. Feasibility is also under way to convert the existing sand based all-weather pitch into a 3G pitch to cater for 11 a-side football and training.

Ysbyty Glan Clwyd is the general hospital for the central part of North Wales and as such is a significant health asset.

The Health domain of the WIMD examines rates of limiting long-term illness, low birth weight, all cause death rate and cancer incidents rates. These are weighted to allow for differences in age profile in different areas. None of the neighbourhoods within the Elwy area appear to suffer from health deprivation utilising these measures.

Nevertheless, the Elwy area has relatively high rates of older people (over 65) meaning that the impact of age related illness is likely to be felt more here than in other areas. Significant research suggests that the number of older people with dementia is set to increase. Numbers of people whose illnesses or frailty means that they are no-longer able to perform daily self-care tasks are also predicted to increase; making health in older age a priority for the area.

Currently the Elwy accounts for 17% of the population of Denbighshire. 14% of the social services clients in the physical disability, sensory impairment and frailty group, 17% of adult carers and 18% of the learning disability group reside in the area.

At 5.4% Bodelwyddan has the highest proportion of Asian and British Asian residents of any part of the county. This is higher than in Wales 2.3% but still lower than the rate for England which is 7.8%. Many of the Indian, Pakistani, and Filipino residents of Bodelwyddan work at Ysbyty Glan Clwyd. Other parts of the Elwy area are less diverse and have a similar make up to the rest of the county.

Many wards within the Elwy area have high proportions of older people (over 65) than is the average across Wales. Parts of St Asaph and Rhuddlan have a higher proportion of older people than the county average but it is Trefnant that stands out with 33% of the population over 65 compared to 23% in Denbighshire as a whole or 19% across Wales.

Participants in the County Conversation focus group for the area highlighted concerns about availability of affordable housing, the out-migration of young people from the area. They felt that local community groups and volunteering played a major role in community cohesion and that this should be extended in future through greater engagement between residents, local groups and public agencies.

Examples of successful support for community initiatives include the Llys y Felin Gardening Project where a community garden outside the community room and a shed and tools to start a gardening club for the members to maintain the area has been created.

The proposals in the Local Development Plan are likely to mean rapid increases in the number of residents and day time visitors to the Bodelwyddan area. A key cohesion task will be ensuring the needs of new and existing residents are met and positive integration is achieved.

The villages within Tremeirchion, Cwm and Waen and Trefnant wards, share a degree of physical isolation and relatively long travel times required to access services such as GPs, dentists, shops and leisure facilities. For many residents with access to private transport this may not be a problem but residents in these communities without their own vehicle may have poor access to services and be at risk of social isolation.

In common with other part of Denbighshire and Conwy rates of crime and anti-social behaviour are low.

The density of Welsh speakers varies from community to community within the Elwy area with 29% speaking Welsh in Trefnant and down to 18% in Bodelwyddan. The area hosts the Ysgol Glan Clwyd the county’s category 1 Welsh Medium secondary school. Participants in the County Conversation expressed concerns about the sustainability of the language and felt that migration patterns (both the out migration of young people from the area and the in migration of people who do not speak Welsh) had a detrimental impact.

Elwy is rich in historical and cultural assets. St Asaph, one of the smallest Cities in the UK boasts a 13th Century Cathedral on the site of Saint Kentigern’s 6th century church. It is the home of the William Morgan Bible. Today the Cathedral hosts the City’s annual music festival and remains a key ecclesiastical centre of the Church in Wales.

Rhuddlan also retains historic buildings and archaeological legacy of a long and eventful history.   For five centuries Rhuddlan was a flashpoint in Anglo-Welsh wars, the site in turn of a great battle between King Offa of Mercia and the Welsh; a Saxon fortified borough; a Welsh princely palace; a Norman fortress (the ‘Twthill’); and finally a powerful stone castle. The first English Prince of Wales, was promulgated by a parliament held here in 1284.

The area from Dyserth into the neighbouring Meliden ward has a rich industrial heritage where recent work to improved access to and interpretation of the Clive Engine House will complement the previous conservation work and enhance the local tourism offer.

Bodelwyddan boasts the iconic St Margaret’s ‘the Marble Church’ and the historic mansion of Bodelwyddan Castle, which currently operates as a hotel, museum and gallery and hosts exhibitions of the National Portrait Gallery. In addition to this Bodelwyddan is also home to Pengwern Hall and Faenol Fawr, a Country Manor Hotel which dates from 1597. The site, which is now Kinmel Park Industrial Estate, and its nearby woodlands, was once the Kinmel Park Military Training Camp. A large, busy military training camp during both world wars and up until the 1960’s. Kinmel Camp was built in late 1914 and by 1919 it was over 3 miles long and had been used to train over more than 17,000 soldiers destined for WW1.

The range of heritage, cultural and environmental assets and developments provides Elwy’s contribution to a Globally Responsible Wales. Sustainability principles will be implemented through the Wellbeing Plan, Local Development and Regeneration Plans, biodiversity and conservation work.