The importance of having access to the internet and the world wide web has grown exponentially in the last decade or so. Whereas in its earliest incarnation the internet was used mainly for information exchange or online communications, nowadays computers, smart phones, smart TVs and other digital appliances access the web, internet connected apps, streaming media and cloud storage as a part of all daily activities.

For many people, the use of social media such as Facebook, Twitter, Whatsapp and Snapchat has become a daily necessity. As well as providing a means of social interaction it is also increasingly used as a means of accessing news and information, and as an aid to decision making.

New technologies also have a wider role in leisure & cultural activities. Increasingly, broadcast media is accessed through internet-ready TVs and digi-boxes, and streaming media allows instant access to music and TV/films interactive gaming, live-broadcast sports and even facilitates participation in international cultural events from your own front room.

Commercial and business access to the internet is also essential. In addition to providing online marketing and sales opportunities the internet offers a means of remote working, long distance co-operation, access to online work tools and data storage, access to knowledge sharing and research work, and international connectivity through instant communications technology – all of which can be much more productive and cost-effective than their offline equivalents.

The cyber world and communications technology also offer potential for employment and economic growth, as it is an expanding high-wage sector. It can require limited investment in more traditional infrastructure, building and land provision than many other industries, as it is portable, flexible, and has aspects that support flexible/home working and small scale start-ups as well as large business developments.

The public and third sectors also increasingly rely on new technology to help deliver their services, either through online transaction or as an information tool. Some examples include the NHS Direct Wales website, online DWP benefits applications, requests for new recycling bins, circulating school newsletters, or reporting minor incidents to the police.

Compared to national figures, the Conwy and Denbighshire area has a lower internet take-up rate than the national average. By the start of 2016, nearly 19% of all residents aged 16+ had either never used the internet or had not used it for over three months. For Wales as a whole this figure was 14%, and the average was only 12% across the UK [i].

There are geographical ‘not-spots’ throughout the area (those places where internet access is restricted, slow or non-existent). Traditionally rural areas are expected to suffer from poor broadband service and 3G/4G reception compared to the more urban areas, but it is worth noting that these internet not-spots are not confined to the more remote and inaccessible areas. There are also many low income families who are unable to afford subscriptions to broadband services. Mobile data can be a more affordable and flexible option compared to fixed broadband packages as it can be accessed without installation costs, line rental, or long term contracts. Without access to all providers of 4G mobile data, many customers will not benefit from the same offers or deals that others receive throughout the UK.

Tackling digital exclusion involves looking at the range of barriers to accessing the internet. Those who are socially and economically excluded – poorer households, the disabled, and the elderly, for example – are much less likely to be internet users than the population as a whole. 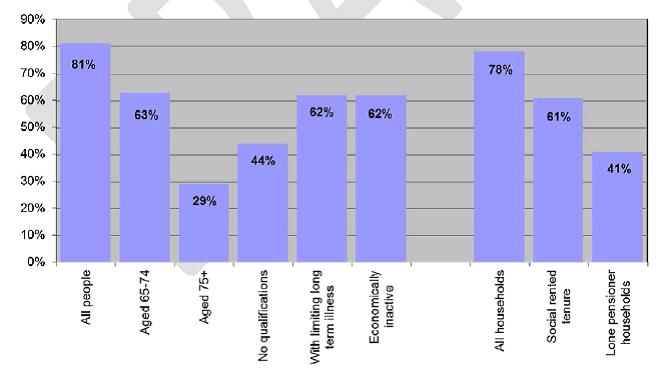 As well as the social and economic opportunities offered by digital technologies, there are some negative aspects around online safety which are increasingly causing concern, and which public authorities, providers of technology and society as a whole are still developing means of dealing with. These include controlling access to inappropriate content for children and young people, on-line grooming (including radicalisation), cyberbullying and online fraud/identity theft.

Cyberbullying is when someone bullies others over the internet or on a mobile phone by sending abusive emails or texts directly to the victim, or by posting or sharing nasty comments or humiliating images where other people can see them. Cyberbullying can have negative effect on mental well-being, and is a particular problem for young people.

Online fraud and identity theft are also particular areas of concern. Though these are new twists on longstanding criminal activity, as with cyberbullying the growth on new technology means that these forms of abuse are now potentially everywhere, all the time. Threats include viruses, which can infect your computer and damage it, and online scams. Online scams are when criminals use the internet to try to con people into giving them money or their personal information, and include fake websites, targeted emails and even grooming of victims through online forums. Anyone can become a victim of scams but older people may be particularly targeted, often because it is assumed that they have more money than younger people. Age UK is particularly concerned that recent changes to private pensions allowing people aged 55+ to take all their pension savings in cash will encourage the scammers to target this age group even more [iii].

The way people access information has changed significantly in recent years with internet usage in Wales increasing from 42% of households in 2004 to 78% of households in 2015. It is estimated that 99% of homes in Wales potentially have access to broadband which has increased from just 12% in 2004. This coupled with the recent rapid increase in the use of smart phones and their associated apps has made a wide range of information and digital services far more accessible than at any point in history [iv].

If the current rate of growth continues it is predicted that almost all households in Wales will have access to the internet inside the next 10 years.

In December 2010 the Welsh Government published “Delivering a Digital Wales”, a strategy for all stakeholders and partners in Wales to realise the benefits of digital communications, recognising the central place digital communications now have in the growth of our economy and quality of life. In particular for the public sector, the Welsh Government want to see more public and government services delivered digitally so they are easier to access and become more efficient and convenient.