People are living longer due to improvements in health care and a range of other life style improvements such as better nutrition, fewer people working in heavy or dirty industries, falling smoking rates, cleaner air and water and better housing conditions. However, many chronic health conditions are particularly associated with older age, so ensuring a healthier old age is an important concern.

Being in good health is, obviously, closely related to how well people retain their independence throughout their life, and particularly in old age. It will impact on how much formal and informal support and care they need, and will affect their ability to fully participate in their community and contribute to the local economy.

As well as being determined by age, ill health is also influenced by experience of deprivation. The Welsh Health Survey shows that the difference in prevalence of good health between people living in the least and most deprived areas in Wales is already apparent at age 0-15. The gap increases with age, peaking in males at age 65-74 (79% in least deprived vs 52% in most deprived) and in females at age 55-64 (84% compared to 56%).

Achieving a reduction in health inequalities and maintaining health and well-being throughout life are two of the six strategic themes within the Welsh Government’s public health framework ‘Our Healthy Future’ and remain central to the ‘more equal Wales’ and ‘healthier Wales’ goals laid out in the ‘Well-being of Future Generations (Wales) Act.

Analysis of healthy life expectancy for 2010-14 (from Public Health Wales[i]) show that the overall, the number of years spent in good health for males is comparable to the Wales average for both Conwy and Denbighshire. For females, healthy life expectancy for Conwy CB is well above the Welsh average (+2.4 years overall), but lower than the national figure for Denbighshire (-1.4).

Healthy life expectancy in years, for least and most deprived areas 2010-14

Women generally spend a lower proportion of their life in good health as a result of living longer, though in fact they have more years in good health than men. However, it seems that women in Denbighshire buck this national trend and have a lower expectancy of healthy life than men. 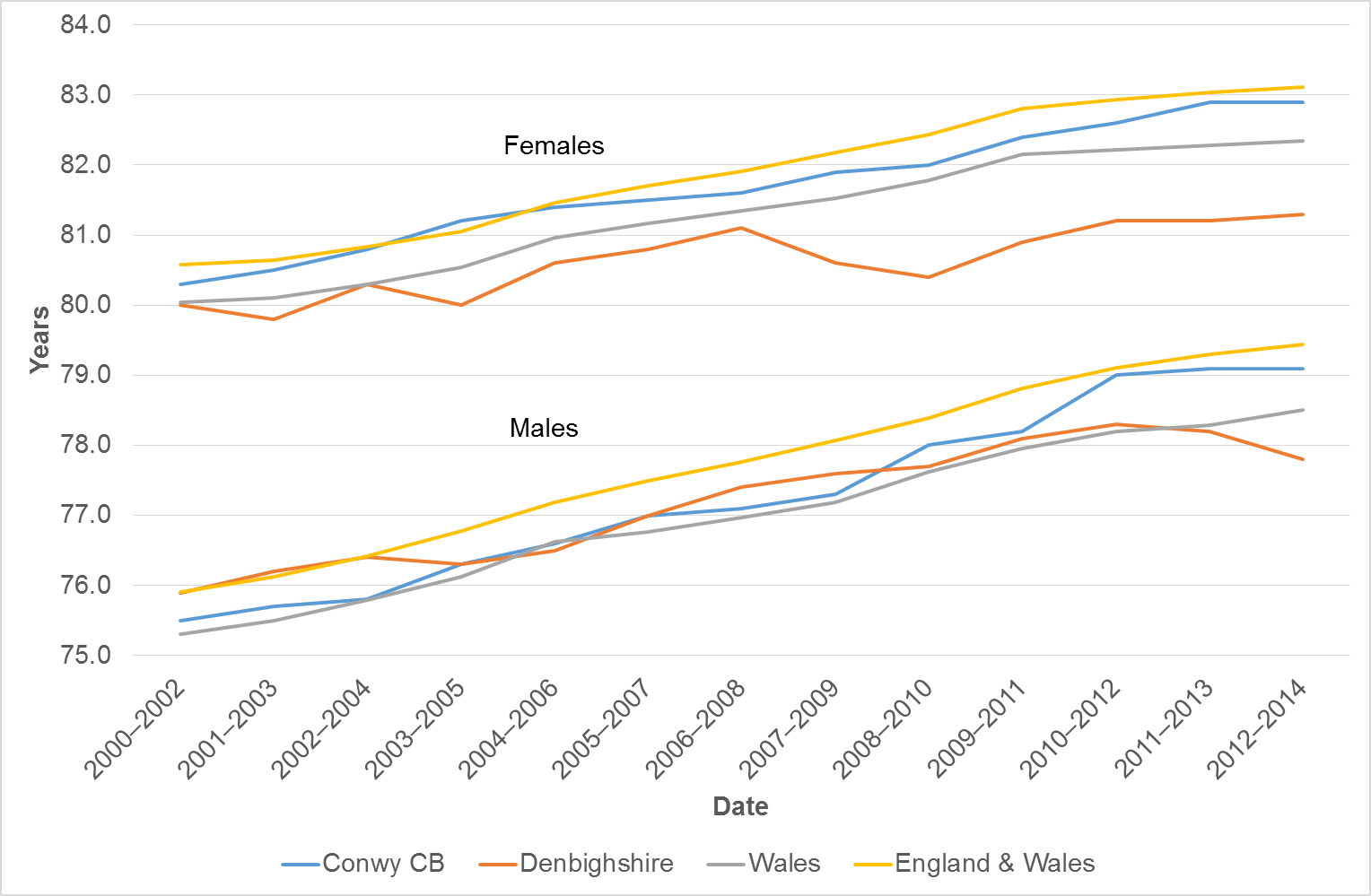 Despite overall increases in life expectancy, the gap between the proportion of life expected to be spent in good health in the most and least deprive areas has shown no clear sign of reducing in the last 10 years.

Chronic health conditions have a big impact on healthy life expectancy. The number of people with chronic conditions who are registered with GPs in Conwy CB or Denbighshire increased in the five years between 2011 and 2016

Life expectancy is predicted to continue to improve, and the population of those aged 65 in Conwy CB is expected to grow from 30,900 in 2015 to 41,600 by 2039 and from 22,100 to 30,700 in Denbighshire[ii] Because most chronic health conditions are associated with older ages, we can expect the prevalence of chronic illnesses to increase in the same period. Improved life expectancies also mean that people with complex needs are living longer than ever before, and this too could lead to increased demands on health and social care services, and on unpaid carers.

The long term upward trend in the proportion of people who are overweight or obese is also likely to cause a rise in chronic health problems, and this will impact on healthy life expectancies in the future (see ‘Tackling obesity’ section for more information)

Because the rate of improvement in healthy life expectancy has not increased as quickly as overall life expectancy, there is a danger that changes in state pension age will lead to a situation where instead of people retiring there will be more people on incapacity benefit as they are not well enough to remain in the workforce.