Health inequities are avoidable inequalities in health between groups of people. In its public health strategy ‘Our Healthy Future’ Welsh Government notes that “where such differences could be avoided, it is unfair and immoral that we tolerate them”. Promoting healthy lifestyles helps to reduce health inequities, and cover four of the ten priorities identified in ‘Our Healthy Future’ (reducing smoking, increasing physical activity, reducing unhealthy eating, stopping the growing harm of alcohol and drugs).

Compared to other unitary authorities in Wales, the citizens of Conwy County Borough are statistically more likely to make healthy lifestyle choices than the Wales average, but significant improvement is still needed. Healthy lifestyle indicators for Denbighshire are generally closer to Welsh averages.

Referrals to health services for substance abuse (all types) in the area totalled over 1,800 in 2014/15 (1,000 for Conwy CB residents and 800 for Denbighshire). Per 100,000 population this gave a referral rate of 864 for Conwy CB and 857 for Denbighshire, compared to a Welsh average of 822 (Conwy and Denbighshire combined = 861). Conwy CB is ranked 9th highest in Wales, Denbighshire is 11th, however we recognise that this does not reflect the many people who do not present themselves to the health service.

Drug abuse is sometimes very visible in public places and is of concern to the public, and has an impact on reported acquisitive crime. However, the number of drug crimes committed and the people involved is quite small (26% of the public in the North Wales Police Force area reported high levels of perceived drug use despite an annual rate of only 2.06 crimes per thousand population[ii]). Of greater concern for health and wider community well-being are psychoactive substances and new novel drugs, which are not necessarily illegal). Addiction to prescription drugs is also an issue.

The biggest concerns about substance misuse are connected to alcohol. Both Conwy County Borough and Denbighshire have high rates for alcohol specific hospital admissions, with, respectively, age standardised rates of 389 and 383 admissions per 100,000 population in 2014/15[iii] and is significantly above the Welsh average of 333 admissions. This ranks them as the third and fourth highest in Wales. 38% of adults resident in Conwy CB and 42% in Denbighshire reported drinking above the recommended guidelines at least once each week, and 20% and 22% respectively reported binge drinking at least once in the last week[iv].

Internationally, alcohol is estimated to result in approximately 3.3 million deaths each year, which arise from over 200 diseases and injury related conditions that are wholly or partly caused by alcohol[v] [vi]. Some studies also suggest that the likelihood of obesity can be higher in binge drinkers and heavy drinkers than in other people, but that this may be due as much to adverse behaviours including poor diet, unhealthy weight control, body dissatisfaction and sedentary lifestyles as to the calorific intake from alcohol.

Until recently, research on the burden of alcohol has focused predominantly on the harms experienced by drinkers themselves. However, there is growing recognition of the harms that an individual’s alcohol consumption can place on those around them including family members, friends, co-workers and strangers[vii].

Parental substance misuse, including alcohol, can cause considerable harm. Children are at risk from emotional and physical neglect as they grow up, including basic necessities like the provision of a decent diet. Many children end up providing both practical and emotional care for their parents (and possibly siblings), often from a very young age. This includes protecting their parents from harm, and looking after the home. They also risk developing emotional and social problems later in life, including a higher than average likelihood of developing mental health and substance misuse issues themselves.

Figures produced by the Children’s Commissioner for England in 2012[viii] estimate that across the UK:

Alcohol and drug use can be contributory factors in susceptibility to injury or death from fire in the home. Many substances affect people’s ability to judge and react to danger – cooking after drinking alcohol can be a specific risk, for example. Alcohol interferes with normal response, impairs judgement, decreases perception and, in sufficient quantity, can lead to unconsciousness. Medication or illegal drugs can have similar effects, and a combination of drugs and alcohol can make people particularly vulnerable.

Substance abuse is sometimes a self-medication response to mental health issues and often goes hand in hand with depression and anxiety disorders. A lack of co-ordination between health, social care and other welfare providers (e.g. social housing) can cause compound problems for suffers, their family, friends and the community they live in, and for the service providers.

Compared to when the Welsh Health Survey first started looking at these issues at a local authority level:

Prevention of health harming behaviour and promotion of healthy behaviour is a priority. However, support for those with unhealthy lifestyles, in particularly obesity and alcohol misuse, also needs to be provided.

The cost of physical inactivity to Wales is estimated to be £650 million per year[ix]. As well as helping to reduce levels of obesity, increasing levels of physical activity has beneficial consequences in terms of increasing peoples’ healthy lifespans. It is widely recognised that several of the key health issues faced by Wales (and other countries) are considered to be ‘preventable’ (Chief Medical Officer Annual Report 2013-14 & 2014-15). These include many of the chronic conditions that insufficient physical activity contributes to, such as cardiovascular disease, Type 2 diabetes, chronic kidney disease, some cancers, osteoporosis and arthritis.

Use of the natural environment to help improve physical fitness and reduce obesity can support social resilience by providing opportunities for interaction and engagement. This helps build social cohesion, along with improving mental well-being and increased physical activity, both of which are of particular benefit in more deprived areas, where social resilience is often at a lower level.

In the model for tackling substance misuse which is presented below, every aspect is important. While we have been good at treatment and support, there is a recognised need to improve early intervention, prevention and also recovery. 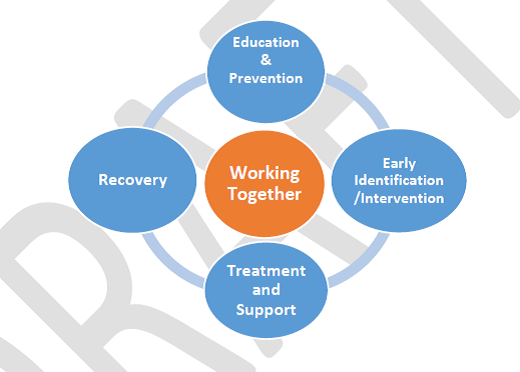 Recovery is about getting people self-sufficient and no longer dependent on the public services. Continuing support through recovery and beyond – perhaps from the volunteer sector – is essential to help avoid the revolving door syndrome of treatment-recovery-relapse, and in helping people become fully functioning members of the community.

In 2013 the Effective Services for Vulnerable Groups organization published a document for all Local Services Boards in Wales, outlining the risks of obesity. By 2050 they predicted that 60% of adult men, 50% of adult women, and 25% of children under 16 could be obese in Wales – higher than the rest of the UK, and one of the worst rates in Europe. Obesity has short-term impacts on a person’s wellbeing and quality of life, and longer term poses the risk of health problems, including heart disease, stroke, type two diabetes, and some types of cancer. It’s estimated that UK-wide costs to the NHS are likely to be £9.7billion, and that wider costs will be felt throughout public services, including social services, housing and the emergency services

In children and teenagers a wide range of health problems can be associated with excess weight including high blood pressure, diabetes, psychosocial dysfunction, and the worsening of existing conditions such as asthma.  However, in children, the persistence of obesity into adulthood is the most important concern

Being overweight or obese significantly increases an individual’s risk of cardiovascular disease, diabetes mellitus, stroke, and some cancers including endometrial, breast and colon.

Response analysis – In 2014 the Conwy & Denbighshire Local Services Board adopted Tackling Childhood Obesity as a priority. In hindsight, the approach was not collaborative, so member organisations tended to focus on the contribution that they could make over and above what was already in place. If this is nominated as a Well-being Objective we’d seek to gain a better understand of the behaviours in deprived areas, looking at statistics available and involving support workers and other stakeholders that work in deprived areas (or with residents of deprived areas). This information would be used to enable effective planning of collaborative solutions.

Smoking continues to be the greatest single cause of avoidable mortality in Wales. In people aged 35 and over, smoking causes nearly one in five of all deaths and around one third of the inequality in mortality between the most and least deprived areas. Smoking in pregnancy has significant negative impacts for both Mum and her baby.

In Denbighshire, the percentage of adults who said they smoked during 2014/15 also increased from 23 to 24 per cent, higher than the Wales average of 20 per cent. This has steadily increased since 2012, despite significant input to reduce smoking nationally, whereas other areas in Wales have experienced reductions in adult smoking by up to 4 per cent. BCUHB are investing in the development of a specialist maternal smoking cessation service across North Wales. BCUHB has also renegotiated pharmacy level 3 smoking cessation contracts with Community Pharmacy Wales to incentivise pharmacists to support people to stop smoking.

Regional research work was recently planned to understand issues associated with alcohol and its impact, mental health and hidden crimes.

People would like to see leisure facilities, walking and cycle routes and encouragement to enable residents to participate in active lifestyles and reap the social, mental health and physical health benefits.