There is an inarguable connection between skills and employment opportunities, both for the individual and for the wider workforce. Enhancing skills significantly improves the ability of the unemployed to find work. At the same time enhancing skills helps those in lower paid jobs to progress within the labour market. As the skills base of the local workforce increases, the area becomes more attractive to prospective investors looking to bring in new business[i].

A fast pace of change in the national and world economy coupled with rapidly evolving technology means that the modern workforce needs to be more skilled than ever before. These skills need to be flexible, adaptable and portable between jobs and even between employment sectors. The continuing move away from a production to a service based economy also means the workforce is increasingly having to develop its social skills, as employment becomes much more customer focussed.

Compared to the Welsh averages, the working age population in both Conwy County Borough and Denbighshire is better qualified. We have fewer people with no/very low levels of qualification, and more people qualified at degree level or above (NVQ4+). Women are generally more qualified than men.

Included within the suite of skills for employment are a whole range of academic and work related qualifications. The route to higher education and a university degree are not suitable for all school leavers or adult learners, and apprenticeships and other work based learning opportunities form a large part of the local skills base. As well as educated graduates a resilient mixed economy will require skilled technicians, administrators, retail operatives and so on. On-the-job learning, apprenticeship schemes and formal higher education all have significant roles to play in providing skills within the employment market.

Compared to the national rate, Conwy County Borough and Denbighshire are both better provided for apprenticeships than the national averages, particularly in the 16-24 age group. Overall rates for work-based learning are comparable to the Wales average.

As well as providing people with the skills they need for employment, apprenticeships may be an attractive alternative to university education for young people who cannot afford or are wary of taking on the debts formal higher education can place on students. This has been recognized by government, who introduced legislation that schools must promote apprenticeships as well and as much as they promote the higher education route.

As part of its push for increasing apprenticeships the government announced a new Apprenticeship Levy in late 2015, which is a new ‘payroll tax’ to help fund an increase in apprenticeships. Set at 0.5% of the employers wage bill and due to be collected through PAYE, the levy has already had a significant impact in the industry, with a lot of larger employers creating new apprenticeship programmes as a result.

For those young people who are less interested in going to university and keen to earn as they learn, the levy is set to create another attractive route into employment. Whilst the levy is generally well received by employers, getting the information across to other key stakeholders is more difficult. There is a stigma surrounding apprenticeships – both parents and young people see university as a measure of success.

Skills outside of the formal education system are also important in gaining and retaining employment. This includes basic life skills like time-keeping, building self-confidence, developing interpersonal skills, and personal hygiene. Schools must play a big part in equipping their pupils with these skills, particularly for those children who come from disadvantages backgrounds which may not equip them with the social tools needed to operate successfully in the workplace and wider society. Support is also needed for many people on in-to-work training programmes. A qualification or work placement on its own is not enough to secure long term employment and enhance an individual’s confidence in their ability to cope with the world of work. People and the organizations they are employed by may need ‘hand holding’ for some time after the official scheme or placement has ended to help avoid drop-off.

The chart below displays the recent trends.

Both Conwy CB and Denbighshire have been successful in increasing skills through work based learning and apprenticeship programmes. 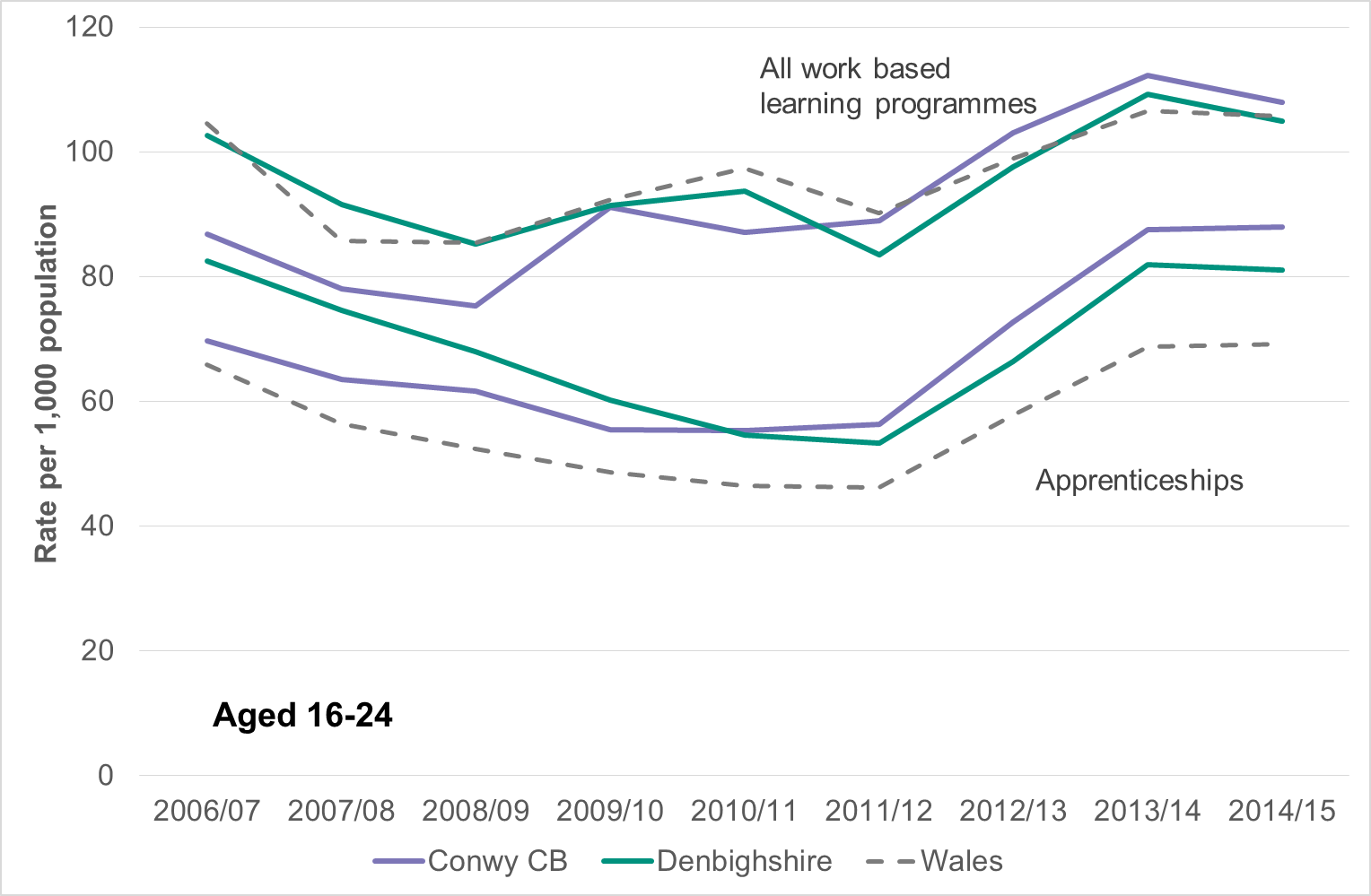 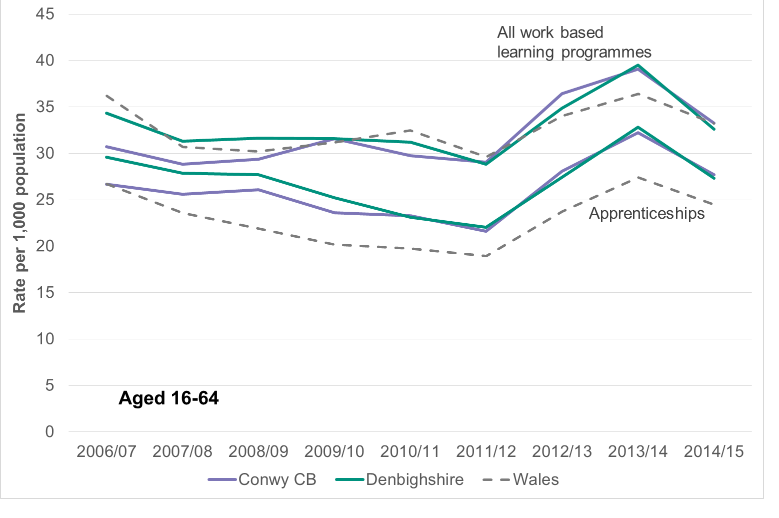 However, despite all these improvements in qualification levels over the past two decades, a June 2011 survey in Conwy County Borough found that 31% of the 200 local businesses who responded identified problems with recruiting sufficiently skilled staff[iii]. A similar survey in 2015 survey undertaken by Conwy County Borough Council showed that 50% of businesses who employed school leavers found them unprepared for the world of work. Over 35% found college leavers unprepared and the figure was 21% for university graduates. A survey of 400 businesses in Denbighshire found that 15% of businesses reported having difficulty finding staff with the right skills. However, the vast majority of businesses (79%) reported not having any of the listed recruitment problems[iv].

These surveys covered a number of different employment sectors and confirm national research that there is a gap between the skills education provides and those that employers are looking for The main difficulties identified were a lack of basic communication skills, customer service awareness, an inability to work on own initiative and resolve simple problems, poor numeracy skills and poor team working skills[v].

The surveys also showed that employers in the area are concerned about a shortage of IT skills among their workforce. Technology is changing at a rapid pace and the need for local business to adapt to this change will need to be addressed.

For the public sector, as well as contributing to the apprenticeship levy they will also be required to meet the legislative requirements contained within the Enterprise Bill. This legislation will stipulate that all public sector organisations will be required to make sure that 2.3% of their workforce are apprentices at any one time. This will potentially be a significant change to the way public sector organisations recruit and train staff.

Responding to growth in the energy sector, in particular in response to the new nuclear power facility on Anglesey is of specific interest to the area at the moment. Skills in the area need to be up to the challenge of the construction, running and maintenance of the new power station. This is not just about specialist engineering skills, but manufacturing and construction benefits as well. The demand will be high for competent and experienced staff and we need to make sure that the local workforce is prepared for that demand so that the economic benefits are realized locally.

Investment through enterprise zones in neighbouring authorities mean that both counties should prepare for growth in the energy sector, in particular in response to the new nuclear power facility, and a further growth in advance manufacturing in the Deeside Area.  Likely requirements will include specialist engineering skills, and new jobs in manufacturing and construction.