With the outstanding natural environment and strong built and cultural heritage, it is no wonder that tourism is a significant sector within the local economy. Our mountains, coastline, beaches, rivers and lakes provide an unrivalled backdrop to support a wide range of activities including walking, water sports, mountaineering, fishing, horse riding and cycling. The area contains two World Heritage sites (Conwy Castle and the Pontcysyllte & Llangollen Canal site) , a rich cultural and industrial heritage which stretches back to the Iron Age, and benefits from the district cultural identity which the two living languages brings. Victorian sea-side resorts of Llandudno and Rhyl have been popular holiday destinations for almost two centuries, and along with the holiday camp in Prestatyn, caravan and camping sites throughout the area and a range of holiday cottages, bed and breakfast and guest house accommodation, provided for over 17 million visitor overnight stays in 2015.

Tourism touches many areas that the public sector has a responsibility for and an interest in, including skills-training and employment, planning, regeneration, heritage and culture; it also benefits many other sectors of the economy including transport, retail and agriculture[i].

Tourism isn’t just for visitors either. The health and well-being of our residents benefits from access to thriving heritage and culture sites, a well-managed natural environment, and access to adventure and activity opportunities on their doorstep.

Figures from the STEAM report for 2015[ii] show that:

Tourism businesses are mainly small operations, many of them family run, and are often deeply rooted in the community. In addition tourism supply chain links bring benefits to many small, local businesses. Income from tourism is often the difference between success and failure for many micro businesses. The employment/business sectors supported by the tourism industry in Conwy and Denbighshire include the visitor attraction, recreation, accommodation, retail and food sectors, as well as the large number of small local businesses such as tradespeople, wholesalers and support services who provide services and goods to those directly involved in tourism.

[i] Partnership for Growth: the Welsh Government Strategy for Tourism 2013 – 2020

In recent years there has seen a steady increase in the number of visitors to the area, particularly day visitors. The number of people employed either directly or indirectly has also increased (from 16,100 full-time equivalent jobs in 2004 to 18,200 in 2015). The input to the local economy has increased from £0.71 billion to £1.28 billion in the same period.

The changes to the national and international economy combined with the effects of fear of terrorist activity and conflict on international travel, have had a positive impact on the local tourism market, as the ‘staycation’ becomes more popular. Adventure tourism in Snowdonia and water sports along the coast have improved and increased their offer over the past few years and attract younger, more active visitors than seen in the past. Surveys conducted by Conwy County Borough Council show that the type of visitor changing for the traditional seaside holiday too. In addition to the long-established coach holiday vacations enjoyed by older visitors, the area is attracting younger families to its seaside resorts. In 2011 the survey found that 58% of visitors to Llandudno were over the age of 55 years. By 2015 this had fallen to 39% of visitors, with 2016 on track to show increased change in this direction.

Number of tourism visitors to Conwy and Denbighshire 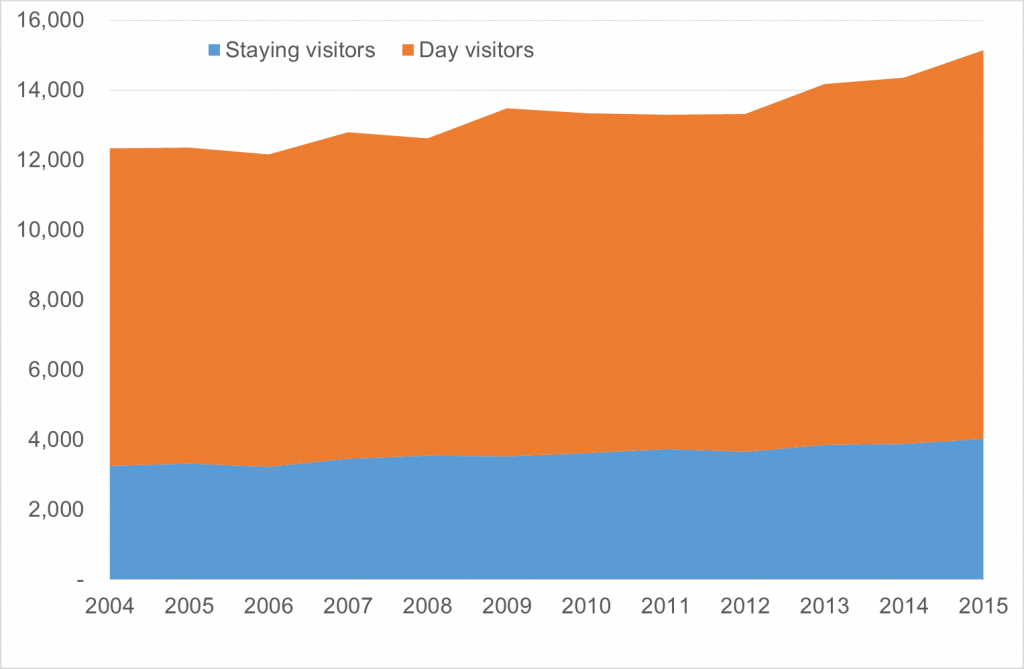 While currently performing well, the local tourism industry is fragile. Most of the attractions are weather dependent and the industry is mainly made up of a large number of small businesses, with limited resilience to economic shock. The industry could possibly cope with a poor summer season as a one-off, but successive poor summers could easily cripple this important sector. The threat of damage from flooding to infrastructure and the natural environment is also a concern.

Tourism is a global industry and is highly competitive. Welsh Government’s ‘Partnership for Growth’ Tourism strategy for Wales 2013-20’ identifies the focus of activity needs to be on: