The most vulnerable groups are often the ones least able to access services. These are also the groups most likely to be suffering from social isolation and loneliness.

Loneliness can affect anyone – regardless of the individual’s age. However, as we age, the risk factors that can lead to feelings of loneliness increase and converge. These factors include[i]:

Research identified in the current North Wales Population Assessment (required under the Social Services and Well-being (Wales) Act) suggests that:

Social isolation and loneliness have been identified as risk factors for poor health (especially poor mental health) and lower well-being, including morbidity and mortality, depression and cognitive decline. Research identified in the North Wales Population Assessment suggests that:

Older people who are socially isolated are also more vulnerable to the complicating effects of unforeseen events such as falls. Because older people who are isolated have smaller networks of relatives, neighbours and friends, they have less unpaid or informal support to fall back on to help meet their social care or other needs; and they may not access the appropriate formal health and social care services, which in turn could have harmful longer-term consequences[ii].

The North Wales Population Assessment identifies the importance of preventing or mitigating loneliness to enable older people to remain as independent as possible. In terms of the impact of loneliness on public services, lonely individuals are more likely to:

Social isolation is also a problem for both children and adults who are carers. The time commitment given to the cared for often means that the social and emotional needs of carer are set aside. Figures show that the number of carers in the community is increasing and therefore the number of socially isolated people in our communities will increase as well.

Isolation within the rural community is a particular issue for those who are older, younger or on lower incomes, and can contribute to other health and well-being problems. Isolation for the elderly is, of course, not limited to rural communities with almost one in five households in Conwy County Borough and one in six households in Denbighshire occupied by a single pensioner. A significant number of these lone pensioners do not have local family support, due to having moved to the area to retire or having children who have moved out of the area.

Geographical access to key services forms part of the Welsh Index of Multiple Deprivation 2014 (WIMD 2014), which is the official measure of deprivation in Wales. This domain of the WIMD considers the average travelling time to access a range of services considered necessary for day-to-day living. These include:

Nine lower super output areas (LSOAs) in Conwy County Borough and eight LSOAs in Denbighshire feature in the 10% most deprived in Wales for access to services, as shown in the map below (those coloured in dark blue). These areas cover a population of about 29,000 people[iii]. These data tell us primarily about travel times to physically access services and indicate a significant population who are likely to suffer poor physical access to services or to be significantly reliant on private transport.  Information from the census also shows a substantial minority of households who do not have access to a private car or van. 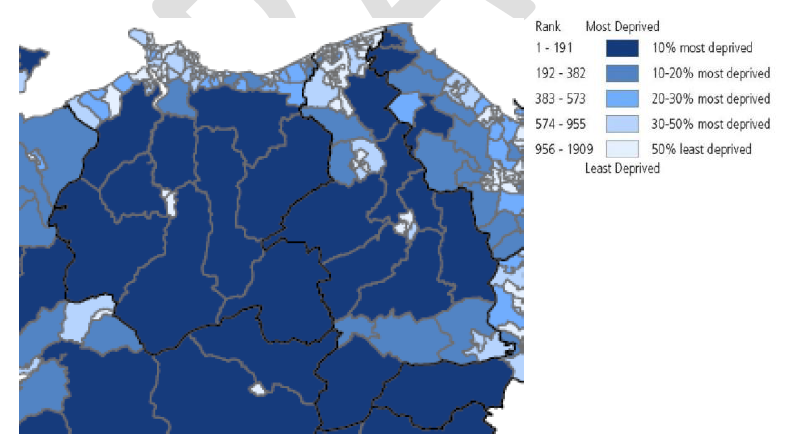 The National Survey for Wales [iv] measured loneliness for the first time in 2016-17. Whilst it is not possible to drill down to local authority level, these findings are available for Wales as a whole. These results challenge some of the conclusions of earlier research, which have found that older people are more likely to be lonely than young people; however loneliness is often due to of impact of a number of factors on a person’s life.

The National Survey analysis found the following results for their respondents:

Projections show that some groups that are particularly vulnerable to social isolation are likely to increase in the next two decades.

Reducing loneliness and isolation is one of the main challenges identified in consultation and engagement work undertaken for the North Wales Population Assessment and is a priority for Welsh Government’s Ageing Well in Wales Programme. Having strong social networks of family and friends and having a sense of belonging to the local community is important in order to reduce social isolation and loneliness for people who need care and support and carers who need support.

Improving access to services for the local population can help local authorities work towards achieving the aim of Welsh Government’s public health strategy ‘Our Healthy Future’ of reducing differences in life expectancy and healthy life expectancy between communities, by improving those of people in more disadvantaged communities.

A cost/benefit analysis undertaken in 2015 has estimated increased service usage at costs of c.£12,000 per lonely individual [vi], Existing data indicates good returns on investment. Given the high cost of the health, social care and other services required by lonely individuals if their circumstances are not addressed, there is a strong case for shifting investment in this area, particularly given the relatively low cost of many effective interventions. In a case study in identified by the Local Government Association, savings totalling £1.2 million were made over a two year period. With every £1 that the scheme cost, the return on investment was calculated to be £3.10 [vii], and savings of £900 per person from a £480 intervention through community navigators who work with individual older people to link them into local services[viii].

The physical isolation of some of our communities is a direct consequence of their geographical location.  Further threats to wellbeing may arise if the availability of sustainable public and private transport cannot be maintained. Current identified risks include decreasing public sector resources, the market implications of a reduction in public transport providers, and the threat to the sustainability of both public and private transport due to the current reliance on fossil fuel resources, which are being depleted and are harmful to the environment. Concerns about the availability and sustainability of transport have been raised in engagement work with the public and officers within the public agencies in each county.

Potential mitigation or enhancement of wellbeing may be possible through the dispersal of services to local centres or mobile service options. However such approaches are likely to require significant investment.  Alternatives to physically accessing services also need to be considered.

Increasingly many services and social connections are made digitally, a trend that looks set to continue. Engagement in both counties has stressed the need to ensure digital access to services are available to all.  There have been infrastructure barriers to achieving this.

Poor infrastructure is not the only cause of digital isolation. There is evidence of lower levels of digital access among older age groups, those on low incomes, those with disabilities and some ethnic groups.[x]

[x] Digital inclusion in Wales. Perspectives on why it matters and what still needs to be done. Wales Co-operative Centre, 2016.

People want the delivery of services with no access problems, and which prevent social isolation. This is expected to include a mixture of local delivery, improved accessible and affordable transport and improved digital access.