The World Health Organisation (2014) has defined mental health as:

‘a state of well-being in which every individual realizes his or her own potential, can cope with the normal stresses of life, can work productively and fruitfully, and is able to make a contribution to her or his community’

Mental health problems range from the worries we all experience as part of everyday life to serious long term conditions. They can start early in life, often as a result of deprivation including poverty, insecure attachments, trauma, loss or abuse [iii].Risk factors for poor mental health in adulthood include unemployment; lower income; debt; violence; stressful life events; and inadequate housing. 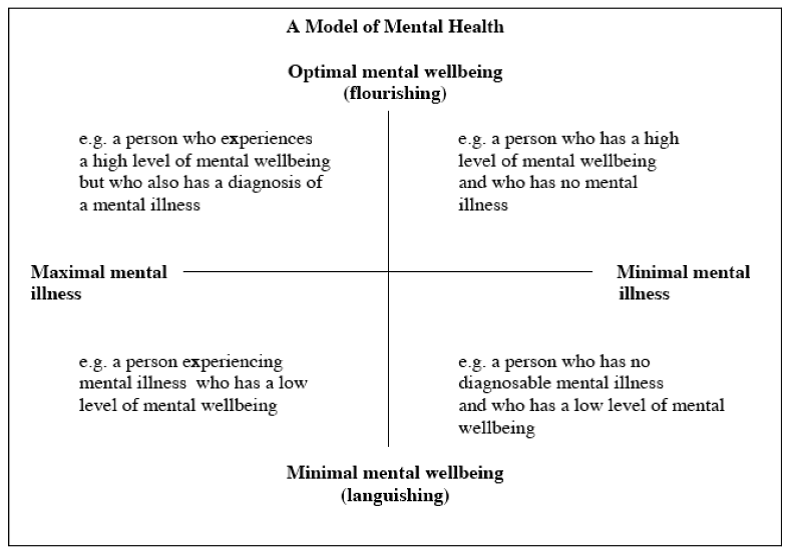 A person’s mental health can impact on physical well-being. For example current research suggests that smoking 20 cigarettes a day can decrease life expectancy by an average of ten years. While the prevalence of smoking in the total population is about 25 to 30 percent, the prevalence among people with schizophrenia is approximately three times as high – or almost 90%, and approximately 60% to 70% for people who have bipolar disorder. Mortality rates for people with Schizophrenia and bipolar disorder show a decrease in life expectancy of 25 years, largely because of physical health problems. [v]Obesity, poor diet and an inactive lifestyle are also contributory factors associated with severe mental illness and poor physical health.

Poor mental health has been reported as an amplifying factor in a range of areas of public sector work that have been discussed whilst consulting with service providers across North Wales during the preparation of this well-being assessment. It is an area of key concern for all partner agencies. These include helping families in difficulty, homelessness presentations, incidents of domestic violence, substance misuse cases (including alcohol), reports of anti-social behaviour, dealing with poor parenting skills, and supporting people into work. A lack of co-ordination between health, social care and other welfare providers (e.g. social housing) can cause compound problems for suffers, their family, friends and the community they live in, and for the service providers.

Some types of behaviour arising from poor mental health can specifically increase the risk of fire and decrease the person’s ability to escape safely. Compulsive behaviours such as hoarding and or blocking up doors and windows cause fire hazards for example. The social isolation that can be associated with poor mental health increases the risk of a fire starting or spreading unnoticed, and also reduces the person’s chances of escaping unharmed.

An estimated 1 in 4 people in the UK will experience a mental health problem each year[vi]. The most commonly reported mental health issues are anxiety and depression.

Severe mental illness is a term used for longstanding conditions. There are many types of mental illness but the easiest way of defining them are as either psychotic or neurotic. Most conditions fit into either of these categories. Their occurrence is measured as a lifetime likelihood.

The Welsh Health Survey reports on mental health, and for 2013/14 the mental health component scores for Conwy CB and Denbighshire were 50.6 and 50.5 – slightly better than the Welsh average of 49.5. A higher score indicates better mental health.

About 9.8% of Conwy CB’s and 11.6% of Denbighshire’s population report being treated for a mental illness. The Welsh average is about 12.1%. 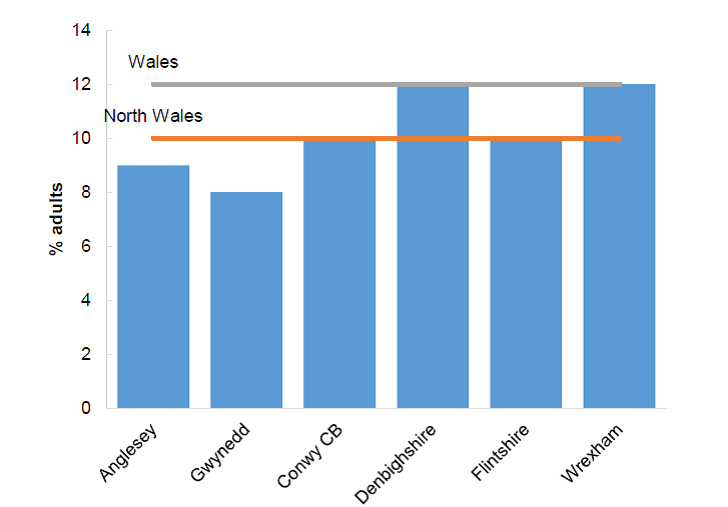 Suicide and self-harming are usually a response to a complex series of factors that are both personal and related to wider social and community influences. The likelihood of suffering from this sort of mental illness is measured as a lifetime likelihood.

There is therefore no single reason why someone may try to take their own life. Suicide is best understood by looking at each individual, their life and circumstances. A summary of evidence on suicide prevention cited a number of factors associated with an increased risk of suicide including gender (male); age (15 to 44 year olds); socio-economic deprivation; psychiatric illness including major depression; bipolar disorder; anxiety disorders; physical illness such as cancer; a history of self-harm and family history of suicide. [viii]

Conwy CB and Denbighshire have suicide rates of 14.4 and 11.2 per 100,000 population respectively, compared to a Wales average of 9.2. Conwy CB experiences the highest rate in North Wales and this is statistically significantly higher than the all Wales rate.

Self-harm is when somebody intentionally damages or injures their body. It’s usually a way of coping with or expressing overwhelming emotional distress. It is an area of growing concern, particularly amongst children and young people. The different ways people can intentionally harm themselves include cutting or burning their skin; punching or hitting themselves; poisoning themselves with tablets or toxic chemicals; misusing alcohol or drugs; deliberately starving themselves (anorexia nervosa) or binge eating (bulimia nervosa); excessively exercising.

The number of self-harming assessments for children and young people in North Wales has more than doubled between 20012/13 and 2015/16 [viii]. Over half of people who die by suicide have a history of self-harm.

Mental health component scores appear to be on a slight downward trend, but have been consistently above the Welsh average.

MIND estimates [ix]that the overall number of people with mental health problems has not changed significantly in recent years, but worries about things like money, jobs and benefits can make it harder for people to cope.

Mental health is a fundamental element of resilience, health assets, capabilities and positive adaption to enable people to cope, to flourish and to experience good health and social outcomes.

Improved mental health brings significant benefits for health and quality of life, for individuals and for communities: these benefits are not only or necessarily the result of the absence of mental illness, but are due to aspects of positive mental health.

Number of people aged 16 and over predicted to have a common mental health problem, North Wales, 2015 to 2035 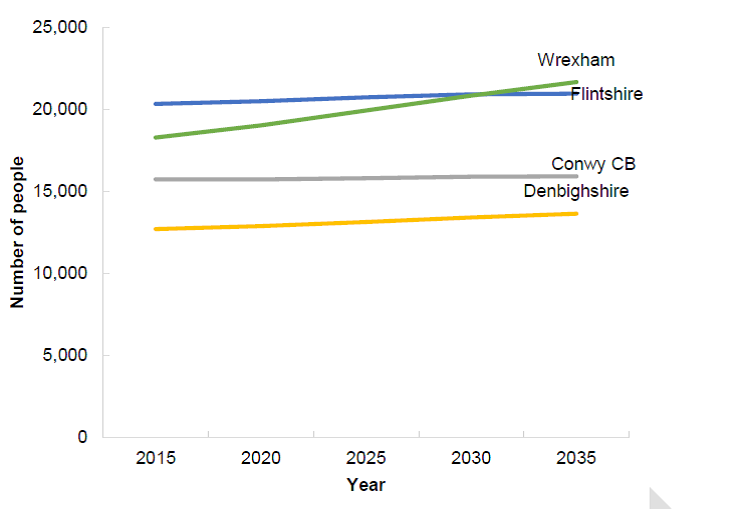 The number of people with mental health problems is likely to increase across North Wales in the next 20 years. Prevalences from the Welsh Health Survey can be used to predict how the total number of people with common mental health problems will change. For Conwy CB the number stays relatively stable between 2015 and 2035, but increases from 13,000 to 14,000 in Denbighshire.

The estimated prevalence of mental health problems generated by the Adult Psychiatric Morbidity Survey and the Welsh Health Survey is over twice the estimate of people who report being treated for a mental health problem. This suggests that there could be many affected people in the population who are not seeking help for various reasons.

Because poor mental health impacts across such a wide range of public service delivery, cross-agency approaches are needed to help those with poor mental health. In particular a joined-up approach would help prevent people from falling through the support gaps which can exist between the trigger points for different levels or types of support.