At the same time a high proportion of the known businesses operating in the area are relatively small in size[ii]. Some 73% of businesses (5,750) employ fewer than 4 people and a further 15% (1,150) employ between five and nine people. Around 40% of small businesses operate below the VAT threshold.

While small businesses may not generate as much income or employ as many people as large companies and organisations, they often form the backbone of the local economy. They fill gaps that big business cannot operate within or are not interested in, and can also respond to limited or niche markets (for example local window cleaners or designer jewellery makers). Much of the small business in the Conwy CB and Denbighshire area is concentrated in the agricultural, hospitality and retail sectors, which are key employers in our rural and tourism based economies.

Small businesses are also more likely to recycle their income within the local economy than both large local businesses and national/global companies and organisations. Research on local authority spending undertaken by the Federation of Small Businesses[iii] showed that for every £1 spent with a small or medium-sized business (SME) 63p was re-spent in the local area compared to 40p in every £1 spent with a larger business.

Other larger employers in the area benefit from the presence of a strong small business sector, as they are often providers of goods, services, and out-sourced contract work for big companies and institutions.

Town centre regeneration – which is a priority for many of our communities – can be helped by small businesses which fill gaps on the high street left by the retreat of national companies to large service centres and on-line retail. 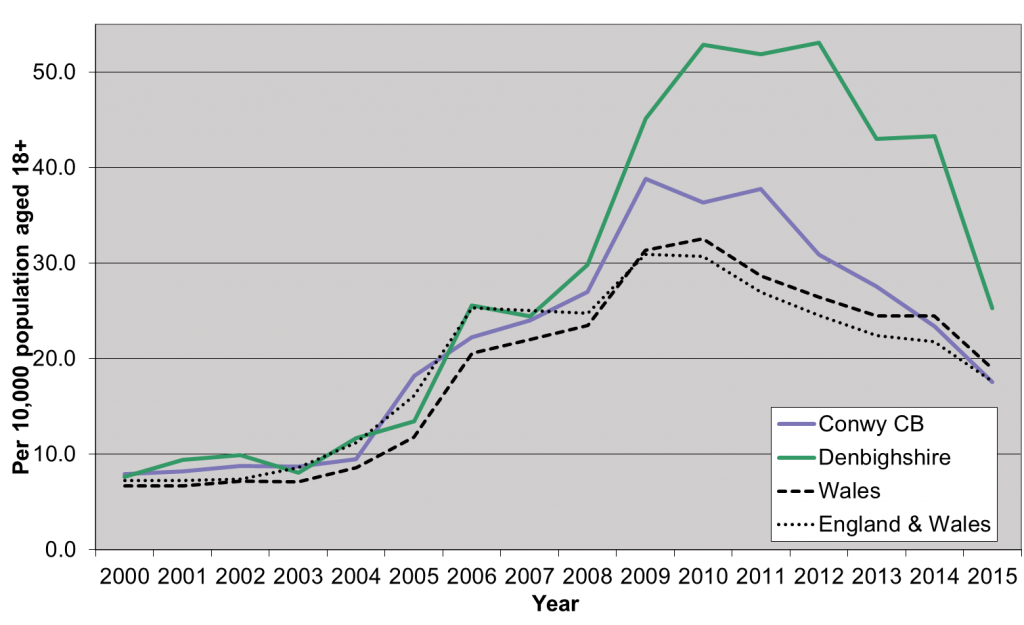 The chart shows the insolvency rate for Conwy CB and Denbighshire between the years 2000 and 2015. During the recent recession insolvency rates increased in the area significantly more than they did nationally. Anecdotal evidence from the local business community suggests that at least in part, this reflects the precarious nature of small business finances in the area.

Since 2011, the number of small business has increased by about 12% – there about 600 more businesses with fewer than four employees and 150 more who employ between five and nine people.

Further business statistics can be investigated in the dashboard below

Small businesses have the potential to be better able to respond and adapt quickly to changing economic climates, as their smaller capital/revenue accumulations can make them more flexible. A decision making process which may consist of only one person and react much faster than larger organisations with more complex management structures . They are also often more customer-focussed which can help them to retain a loyal customer base and stay afloat at times of economic downturn.

However, small capital/revenue reserves can also limit ability to adapt and expand, and small operations can sometimes lack skills outside of their core business areas. Support from local and national government, is often essential to help with things such as business and financial planning, improving skills and responding to new technology. Umbrella organisations for trade and commerce also have a role to play.

Succession planning for small businesses is an area which could benefit from support and improvement. Successful small businesses which have closed because of the retirement of owners/managers may have been able to continue if successors could have been found. Often these are family businesses which would traditionally have been passed on to the children. However, improving education and employment opportunities for younger generations have seen a move away from this tradition, with children making different career choices to their parents.

Consultation responses from Conwy felt that more support was needed for existing businesses in the county and that investment should also be available to start-up and rurally based businesses. There was also a feeling that in order to attract better investment to the county, Conwy would need to have a recognisable brand.
This website uses cookies to improve your experience. We'll assume you're ok with this, but you can opt-out if you wish. Cookie settingsACCEPT
Privacy & Cookies Policy