A rise in the elderly population, particularly if not matched by health improvements, will place ever-greater pressure on the public finances, as a relatively smaller working-age population supports growing spending on health, social care and pensions.

Median age. – the age at which half the population is older and half is younger.

[i] Political challenges relating to an ageing population: Key issues for the 2015 Parliament, Commons Library Research Paper, May 2015

The increase in the number of people aged over 65 is mainly due to two factors; firstly improvements in mortality rates mean people are living longer; and secondly the ageing on of the large ‘baby boom’ cohort born after the Second World War.

Conwy CB and Denbighshire have had high proportions of older people in their population for some years, in part due to the region’s attractiveness as a retirement location – which brings migrants from other parts of the UK into the area. The numbers of people in the older age groups started to rise significantly in Conwy CB the 2000s, possibly due to retirement related-migration. From the late 2000s the increase in the number of people aged 65+ is also due to the large number of ‘baby boomers’ (the generation who were part of a period of very high birth rates after World War 2) entered the post-retirement age group. 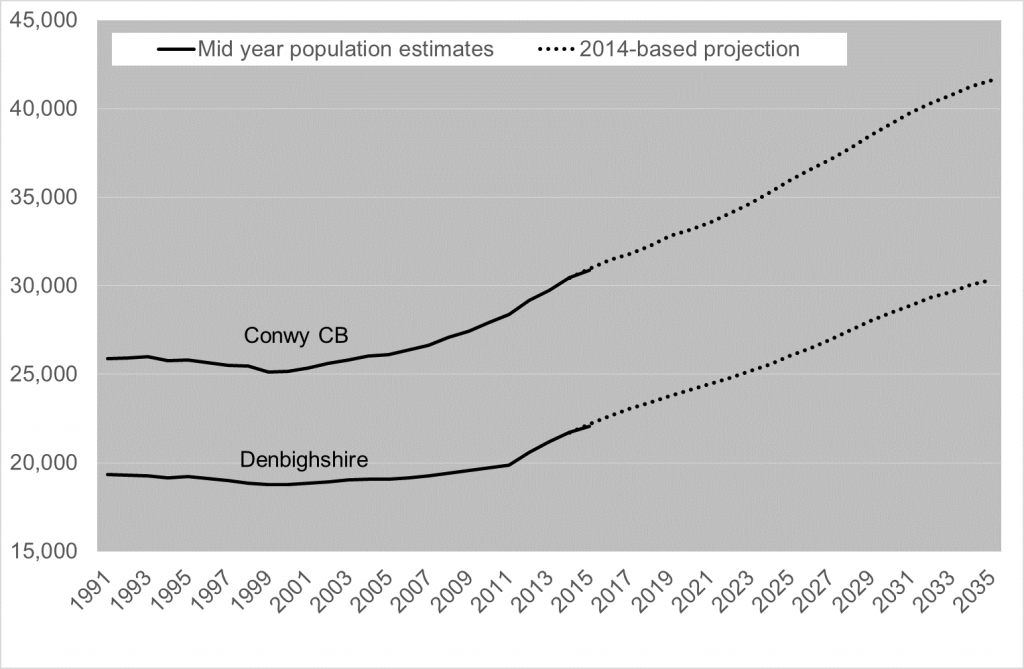 The net out-migration of young people at ages 18-29, and which has been happening in both Conwy CB and Denbighshire for some years, compounds the skew towards older age groups within our population. (see section 3.16 for more details)

The number of older people in the county is projected to increase significantly over the next 20 years as a result of increased life expectancy, and the people born during the second UK baby boom of the late 1950s/early 1960s entering the retirement age groups alongside the post-WW2 baby boomers. In particular there will be a large increase in the number of people aged 85 and over, as the baby boomers start to move into that age group.

Responses to the consultation in Conwy demonstrate that people are concerned about the future and the level of provision needed to support the ageing population. There was also worry about the future provision of support for carers of all ages. People have said that they would value better access to services (information/ transport/ technology) and how this may combat problems with loneliness and isolation. Residents also felt that a joined up Mental Health Service would be a high priority for the future.